This website is about healing in one form or another and I would like to dedicate my first Blog to Mata Amritanandamayi or Amma as she is known to millions of people around the world.

Amma is the supreme healer, a visionary humanitarian and spiritual leader who has personally embraced more than 34 million people across six continents, travelling around the world delivering her message of love and compassion.

On December 1st Amma arrived in Rome to participate as part of an historic event aimed at eradicating modern slavery by 2020. 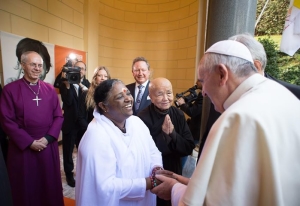 “Pure, Selfless Love is only medicine for healing wounds of human trafficking” Amma

On December 2, Amma joined His Holiness Pope Francis, the leader of the Catholic Church, as well as leaders of the Anglican Church, Orthodox Churches and the Buddhist, Jewish and Muslim faiths to sign a Joint Declaration of Religious Leaders against Modern Slavery.

The declaration will underline that modern slavery, in terms of human trafficking, forced labour and prostitution, organ trafficking, and any relationship that fails to respect the fundamental conviction that all people are equal and have the same freedom and dignity, is a crime against humanity, and must be recognised as such by everyone and by all nations. They will affirm their common commitment to inspiring spiritual and practical action by all faiths and people of goodwill everywhere to eradicate modern slavery.

The event is being organized and conducted by the Global Freedom Network (GFN). According to GFN research almost 36 million people have are currently trapped in modern slavery, having lost their freedom and being exploited for personal or commercial gain.

According to the International Labour Organization, the total profits obtained from the use of forced labour in the private economy worldwide amount to $150 billion U.S. per year.

To find out more about Amma and her organisation here in Ireland: www.ammaireland.org